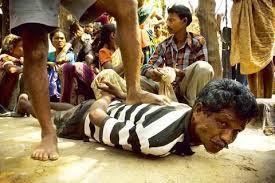 I’ll tell you a story so do bear with me & it goes like this:

1. One thumb rule of society is, “Violence begets even more violence”. Once it ensues, you just can’t overcome this fiendish cycle. One fine day Charu Majumdar, Kanu Sanyal & Jangal Santhal let loose Pandora’s box when they chose to initiate a violent uprising against the excesses of state.

2. On the fateful day, a tribal; Bimal Kisan having obtained a judicial order to plough his fallow field chose to defy zamindar sahibs of Naxalbari. As is the norm of our society; these rouge adivasis needed a fitting reply. Armed thugs of zamindars conniving with local police went on a rampage; incinerating houses & thrashing every living soul. Now, only this time they didn’t realize that these disgruntled villagers could no more be tamed with lathis.

3. Over these five decades, this uprising in some far flung village of rural Bengal went on to transform the fate of millions. As I write this, there are still many a districts were Naxals run parallel government & their fiat terrorizes locals.

4. The state instead of engaging constructively chose to oppress & denigrate Adivasis. Over the decades & as a consequence of policies of Indian governments, Adivasis were further alienated. Suspicious eyes, spies & counter- spies would tear adivasi society. Actually, dear violence never helps it may suppress fault lines in a society for a time being but, over time it only aggrandizes an issue turning it into a menace.  Selwa-Judum, the counter insurgency militia mobilized by the state to purge of naxals did more harm than any good. This charade of Selwa-Judum led to tribal animosity with people settling old scores in pretense of fighting naxals & instead of creating cohesion in struggle against ultras it further cleaved the tribal society.

Finally, to sum this up Naxalism is a self defeating ideology, in hindsight it has severely denigrated those whose sufferings it advocates to alleviate.