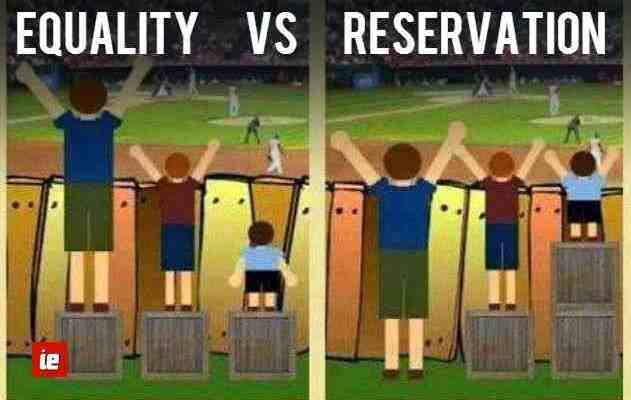 As the nation coasts through the upheaval post liberalization & implementation of New Economic Policy in 1991, a new breed of urban middle class rises. It is well versed with the nuances of west: liberalism, free market policy & lassiez- faire theory. It fiercely espouses the view that people irrespective of their social standing must compete on the same turf for education & jobs. This way they believe, the ‘deserving’ are rewarded & the nation treads on the path of ‘prosperity’.

So long so good, however, this dream of an ostensibly utopian society misses on the nation’s large segment of the destitute & the downtrodden: the backward classes.  A millennia of minatory subjugation & humiliation under the guise of varna & jati has crippled India’s Dalits & Adivasis socially, economically & politically. In a democratic society like ours, it is incumbent on the government to safeguard the ‘just’ interests of disparate social groups. The provision of reservation is an endeavor in this regard; it vindicates those stuck at the nether end of social strata giving them an opportunity to stake a claim in nation’s future.

As the reservation debate rages in, men of erudition often put forth the banal argument that it is a moral obligation on a liberal nation-state like India to right the grievous wrongs of caste & class. They say, although reservation may not be the elixir but, surely it is some form of reparation that we owe to the Dalits & Adivasis. This seemingly innocuous argument is in fact a devious manifestation of the vices of caste & class. It conveniently eschews the fact that Dalits & Adivasis like plethora of other social groups are equal citizens of the nation & have constitutional rights over the nation’s resources tangible or not.

The backward- classes return miserably on various social indicators be it education, nutrition, infant mortality & per capita income.  We’ve seen in 60’s & 70’s how disenchanted & disillusioned Adivasi  youth would join the ranks & files of innumerable naxal militias, wrecking havoc on India’s fragile internal security. Today, the Naxal movement may sound as some anachronism in urban centres of India but, it continues to be formidable force across the hinterlands of Jharkhand & Chhattisgarh.

Curiously, the loquacious Indian ‘intelligentsia’ has failed to realize that people especially the economically vulnerable sections of the society ought to be an equal stakeholders in the nation’s future. Reservation thus, tries to offset the advantage of ‘accident of birth’ that upper classes have over the browbeaten.