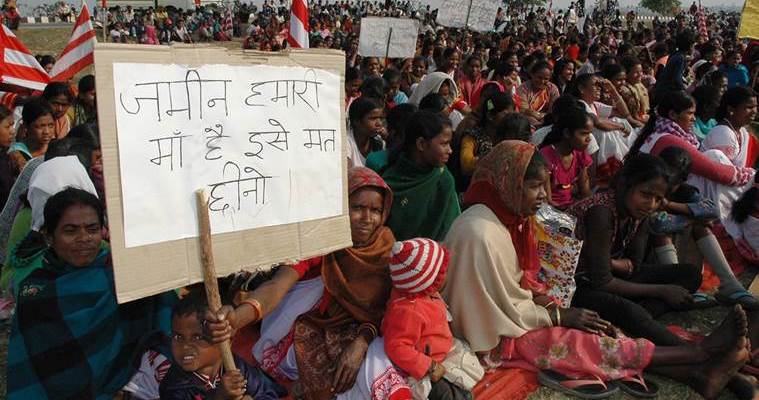 I grew up in Hazaribagh; a small, desolate town surrounded by hills & thick forests in the Chotanagpur region of Jharkhand. We never saw a train move in, the last time I heard; the residential quarters for Railway employees were ready but, the railway line was still under construction; typical Indian mentality.

The town is known for its vast untapped coal resource, a national park & a relatively cool climate throughout the year. Retirees from PSUs across the state are known to flock the town hence, its, moniker; ‘retirees hotspot’.

I studied at DAV Public School, Hazaribagh nestled below the famous Canary Hill; folklore has it that the hill & the adjoining forests were the abode of tigers in the 60’s. It has been decades since the last stray tiger pug- mark was found. It is the same old story; reckless deforestation & growing pressure of population has wrecked havoc on the picturesque town. Today, Hazaribagh is a vestige of its earlier self. Same is the story of other towns & cities of Jharkhand; Ranchi in the past used to be the summer capital of undivided Bihar & today, temperature regularly soars over 40C in May.

Growing up in the Muslim locality of Pagmil; infamous as ‘mini- Pakistan’ for its unusually higher concentration of Muslims I had little understanding of the Adivasi culture. If I may digress; it is worth mentioning that Hazaribagh is a communally volatile town with a sordid history of riots throughout the 80’s. As the Ram Mandir movement spearheaded by Sangh Parivar gathered momentum; the syncretic culture of the town was destroyed. Just as the cities & towns of UP & Bihar, Hazaribagh today is cleanly cleaved with Hindus & Muslims living in enclaves of their own.

In my school years, I can remember only a single Adivasi student. I feel ashamed to admit; I never realized that the Adivasi population even existed in the first place. When I moved to Ranchi, the capital city & the centre of Adivasi struggle for a separate homeland; I was overwhelmed by the visible presence of Adivasi culture. It was the first time I realized that Adivasis were in fact a heterogeneous people practicing multiple faiths, from Hinduism to Christianity & their native Sarna faith. From Grand churches built by German missionaries to sacred Sarna places of worship; the Adivasi culture has weathered them all.

The provision of affirmative action within the constitution of India has helped the Adivasis dispersed across Eastern India to move up the social ladder. Those who belittle this constitutional guarantee ought to realize that the Indian society is one of the world’s most discriminatory; redolent with casteist customs that abhor the Adivasis as out-castes.  Let me put this up bluntly; this constitutional guarantee is no privilege for the downtrodden; it is actually an atonement for the collective sins of our society that has for centuries robbed the Adivasis of a dignified life.

During the early 19th century; Adivasis were the first people to rise against their British overlords. Decades before the 1857 revolt fought under the name of a senile & reluctant Mughal Emperor Bahadur Shah Zafar; the Adivasis rebelled against the Raj. Kol & Santhal rebellions are only a few well- documented rebellions among the many that originated in Jharkhand.

The suffering & subjugation of India’s mainstream population at the hands of the British Raj has long been documented by scholars & authors of repute. However, it’s the Adivasis who were the worst affected by the Raj & its draconian fiats. The widely educated Hindu upper class had little problem adapting to changing times. They had done it in the past when the Muslim rulers imposed Persian as the official language of courts across the subcontinent. The Hindu upper class was probably the first of the people to learn Persian & quickly moved up the social ladder. Later with the arrival of the British Raj; upper castes Hindus along with the Parsis were the first to learn English. This way these people made the best of the available opportunities to them.

The Adivasis on the other hand had always been the:  ‘shunned’ & the ‘out- castes’; people who didn’t fit into India’s age old caste tradition. These were the same people never permitted inside the city walls during the ancient/ medieval era. Although, this appears outright fiendish but, being discarded from the Indian caste tradition spared them of the fate of the Dalits who by their birth were expected to perform odd jobs while residing in the fringes of the city/ town. The out-caste status of the Adivasis meant, they were at least free to do their own thing beyond the confines of city.  Hence, the Adivasis developed a symbiotic relation with the forest. Adivasi villages began mushrooming around the forests. The forest land helped them in subsistence.  That’s why the forest is such an integral part of the Adivasi custom.

As the Europeans; the Dutch, the French, the English & the Portuguese wrestled for the control of India’s coasts while the once mighty Mughals receded within the walls of Delhi; The English won a decisive battle against the Nawab of Bengal; Siraj- ud- Daullah in 1757. With this, the English became the uncontested masters of India’s richest land; Bengal. Emboldened by their victory the English annexed the interiors to create buffers for their rich possessions along the coast. The following decades saw the invention of rail- roads. The rail- roads gave the British an insuperable weapon in their conquest of India; an aura of omnipresence. The Raj didn’t need to station its armies at multiple places; they could easily move their men of war between different centres of rebellion at short notice. This drastically reduced the cost of war for the Raj & multiplied the losses for the rebels by manifold.

From decades of mutual distrust but, a tacit understanding to outright animosity; the Adivasi & the Raj relation reached the point of no return. It was always going to a battle of un-equals. The Adivasis with their bow & arrows up against the Raj– Army; armed to its teeth. Innumerable Adivasis were slaughtered & their leaders mercilessly tortured. The inhumane treatment meted out by the Raj unwittingly created scores of martyrs. The stories of Birsa, Sidho & Kanho encouraged thousands more to confront the British- Raj. The region in & around modern day Jharkhand was always a trouble- maker for the British government, post independence the Jharkhand Party was founded in Ranchi (1949) to press the Congress to recognize Jharkhand as a separate state.  The Congress Party had promised reorganization of states post independence but, the vicious environment of partition prevented Nehru from honoring his word. Finally, in 1952, following the death of a protester and independence revolutionary Potti Sreeramulu demanding a separate Telugu state from Madras forced Nehru to soften his stand and new states were recognised on the basis of language.  The demands for a separate Adivasi homeland in South Bihar would take many lives & another five decades to materialize.

One argument that I often hear is; the Telengana rebellion of 1946 funded by the Soviets rattled the Congress Party & the British government. The imminent independence of India & the aggressive Soviet posture meant, the Congress party became suspicious of any Left- wing movement. It didn’t help the statehood demand when it was increasingly seen by the Central government as closely allied to the ultra- Leftist Naxal movement. This may be one of the reasons why the statehood demands took so long to fructify.

Another theory has it that; the Bihar government would never relent to demands of a separate Jharkhand. The formation of would-be Jharkhand was to suddenly ‘rob’ the Biharis of their ‘legitimate’ right over the vast mineral reserves of Jharkhand; touted to be nearly 40% of India’s total. Successive governments of Bihar tried best to sabotage the statehood demands by exaggerating the nature of relation between those fighting for a separate state & the ultra- Leftist Naxals.  Coupled with the same mutual distrust (as between the Raj & the Adivasis) the relations between Adivasis & the Bihar government saw no reason to thaw.

Nehru’s commitment to socialism is well- known; PSUs established immediately after independence like: DVC , Coal India & NTPC were all committed to the idea of ‘inclusive growth’ i.e. helping the local community to grow & prosper along with these public companies. Most of these PSUs drew raw materials from mineral rich Eastern India; in sharp contrast to the past, many these PSUs were headquartered in Eastern India giving a sense of local ownership to the people of the region. The concept of ‘inclusive growth’ pulled many millions out of abject poverty giving them a dignified life.

Post- liberalization India is a ruthless society that fiercely advocates for ‘trickle- down’ economics, a term that theoretically implies unfettered market growth with minimal government interference; simply a fancy way of saying; the rich should continue to hoard wealth at a breakneck pace & the government does little to redistribute.  This ruthlessness has meant that the concept of ‘inclusive growth’ is vilified by everyone; from policymakers to the mainstream media. The PM’s ‘sabka sath sabka vikas’ is barely more than sloganeering. For PM Modi by far is the most divisive leader the country has ever seen & his policies are anything but, pro- poor; the recent demonetization fiasco more than stamps this fact.

This policy shift from ‘inclusive growth’ to ‘pro- market liberalization’ has had an adverse effect on the Adivasis of Jharkhand. Lands were forcibly taken away & given to big industrial houses whose policies are driven only by consideration of profits. The very concept of alleviating local communities is alien to them. The recent amendments in the Chotanagpur Tenacy Act (1908) by the BJP led state government only aims to weaken Adivasi land ownership & pave the way for big industrial houses to acquire tribal land easily. This year Jharkhand was ranked among the top Indian states for ease of doing business; commendable feat for a state that’s otherwise in news only for three reasons; Naxalism, Dhoni & the corrupt Former- CM Madhu Koda.  As this news spread across the state I only wondered; if the destruction of environment was equally well-documented? As should be the case; there’s utter disregard for climate & environmental issues here. Environmental destruction as a consequence of industrialization has only handful proponents who have worked with the Adivasis like Jean Dreze; a Belgian born eminent Indian Economist associated with Ranchi University & Bela Bhatia ; a human right activist hounded by the Chhattisgarh state for her active participation among the Adivasis.

Sadly, the policies pursued by state governments in the states like Jharkhand & Chhattisgarh are inimical to the substantial Adivasi populations there.  From the British- Raj to modern day Federal governments, little has changed for the Adivasis. Their inalienable right on Jal (water), Jangal (forest) aur (&) zameen (land) continues to go unheeded.