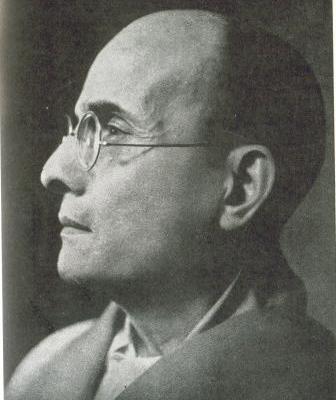 Along with Jinnah Savarkar was the other pillar of the two-nation theory, loved spewing venom & instigated young men to kill in the name of his vile ideology of exclusive nationalism. Most of these young men were quickly disowned by him once they had served their purpose. Curiously, Savarkar who’d sing eulogies in the name of ancient India had to import his version of nationalism that grew in Europe between 1870’s & 1930’s. His ideology was an European import; do understand that nationalism rather its current chauvinistic form propped up  in Europe as a result of the invention of rail-roads. New modes of transport connected distinct group of people hence, the need for a dominant narrative was required that could bind them together. Most of the time these disparate groups only had a religion or a language that united them.

Such an exclusionary version of nationalism always requires an enemy within, to rally the majority community against them; Jews across Europe, Protestants in S. Europe, Catholics in N. Europe were the enemies that needed to be shown their place. Savarkar was smitten by this version of nationalism & he believed he could unite the Hindus by using the Muslims as a bogey. The old historical wounds would only help him find audience among a segment of the majority community.

No doubt each time he was about to get into trouble he’d swiftly disown everyone & everything he stood for. This is by far the single biggest difference  between Gandhi & Savarkar; while Gandhi was accompanying his colleagues to jail & fighting the colonial regime tooth & nail, in S. Africa & later in India, Savarkar was petitioning the colonial regime for mercy. Gandhi owned the consequence for everything he believed; he took the bullet right through his heart for believing that Hindus & Muslims could co-exist as one nation whereas Savarkar would disown everything at the drop of a hat for his personal well-being. It’s ironical people call him “Veer/brave-heart” when in reality he was the epitome of pusillanimity.

This is one of the many petitions he wrote to the Colonial regime:

Savarkar submitted his mercy petition on 14 November 1913, and presented it personally to the Home Member of the Governor General’s council, Sir Reginald Craddock, in which he stated

“I beg to submit the following points for your kind consideration:

(1) When I came here in 1911 June, I was along with the rest of the convicts of my party taken to the office of the Chief Commissioner. There I was classed as “D” meaning dangerous prisoner; the rest of the convicts were not classed as “D”. Then I had to pass full 6 months in solitary confinement. The other convicts had not. During that time I was put on the coir pounding though my hands were bleeding. Then I was put on the oil-mill – the hardest labour in the jail. Although my conduct during all the time was exceptionally good still at the end of these six months I was not sent out of the jail; though the other convicts who came with me were. From that time to this day I have tried to keep my behaviour as good as possible.

(2) When I petitioned for promotion I was told I was a special class prisoner and so could not be promoted. When any of us asked for better food or any special treatment we were told “You are only ordinary convicts and must eat what the rest do”. Thus Sir, Your Honour would see that only for special disadvantages we are classed as special prisoners.

(3) When the majority of the casemen were sent outside I requested for my release. But, although I had been cased (caned?) hardly twice or thrice and some of those who were released, for a dozen and more times, still I was not released with them because I was their casemen. But when after all, the order for my release was given and when just then some of the political prisoners outside were brought into the troubles I was locked in with them because I was their casemen.

(5) Therefore will your honour be pleased to put an end to this anomalous situation in which I have been placed, by either sending me to Indian jails or by treating me as a transportee just like any other prisoner. I am not asking for any preferential treatment, though I believe as a political prisoner even that could have been expected in any civilized administration in the Independent nations of the world; but only for the concessions and favour that are shown even to the most depraved of convicts and habitual criminals? This present plan of shutting me up in this jail permanently makes me quite hopeless of any possibility of sustaining life and hope. For those who are term convicts the thing is different, but Sir, I have 50 years staring me in the face! How can I pull up moral energy enough to pass them in close confinement when even those concessions which the vilest of convicts can claim to smoothen their life are denied to me? Either please to send me to Indian jail for there I would earn (a) remission; (b) would have a visit from my people come every four months for those who had unfortunately been in jail know what a blessing it is to have a sight of one’s nearest and dearest every now and then! (c) and above all a moral – though not a legal – right of being entitled to release in 14 years; (d) also more letters and other little advantages. Or if I cannot be sent to India I should be released and sent outside with a hope, like any other convicts, to visits after 5 years, getting my ticket leave and calling over my family here. If this is granted then only one grievance remains and that is that I should be held responsible only for my own faults and not of others. It is a pity that I have to ask for this – it is such a fundamental right of every human being! For as there are on the one hand, some 20 political prisoners – young, active and restless, and on the other the regulations of a convict colony, by the very nature of them reducing the liberties of thought and expression to lowest minimum possible; it is but inevitable that every now and then some one of them will be found to have contravened a regulation or two and if all be held responsible for that, as now it is actually done – very little chance of being left outside remains for me.

In the end may I remind your honour to be so good as to go through the petition for clemency, that I had sent in 1911, and to sanction it for being forwarded to the Indian Government? The latest development of the Indian politics and the conciliating policy of the government have thrown open the constitutional line once more. Now no man having the good of India and Humanity at heart will blindly step on the thorny paths which in the excited and hopeless situation of India in 1906-1907 beguiled us from the path of peace and progress. Therefore if the government in their manifold beneficence and mercy release me, I for one cannot but be the staunchest advocate of constitutional progress and loyalty to the English government which is the foremost condition of that progress. As long as we are in jails there cannot be real happiness and joy in hundreds and thousands of homes of His Majesty’s loyal subjects in India, for blood is thicker than water; but if we be released the people will instinctively raise a shout of joy and gratitude to the government, who knows how to forgive and correct, more than how to chastise and avenge. Moreover my conversion to the constitutional line would bring back all those misled young men in India and abroad who were once looking up to me as their guide. I am ready to serve the Government in any capacity they like, for as my conversion is conscientious so I hope my future conduct would be. By keeping me in jail nothing can be got in comparison to what would be otherwise. The Mighty alone can afford to be merciful and therefore where else can the prodigal son return but to the parental doors of the Government?Hoping your Honour will kindly take into notion these points.”

Notice the near servile & sycophantic tone of his petition. He’s ready to “tow the government line” & is willing to serve his English masters in whatever capacity they deem fit. Like a typical coward he disowns his followers & calls them “misled”. Over the years he wrote multiple clemency petitions & each was more obsequious & fawning in its tone.

Some excerpts from A.G. Noorani’s Savarkar & Hintudva: The Godse connection:

“Bhagat Singh was a man of noble disposition. Savarkar wallowed in hate. Bhagat Singh was an Indian nationalist. He distanced himself from Lala Lajpat Rai, when his mentor turned communal. Savarkar was a Hindu nationalist who spread communal hate. Bhagat Singh was generous to a fault. Savarkar was mean even to those close to him. In prison Bhagat Singh realized the futility of violence and turned against its use. Savarkar’s mindset protected him from such realisation. Bhagat Singh refused to plead for mercy even when he faced the gallows – in fact, he pleaded that he and his comrades be shot dead like prisoners of war rather than hung, since they were guilty of waging war against the British empire. He wrote a sharp letter to his father asking not to write in his defense to the Tribunal trying him. Savarkar’s is a remarkably consistent record of sheer cowardice. Every terrorist of old wielded the gun himself, led a life of self-denial, had a noble vision of India, was prepared to lay down his life for his country. The prospect of death did not deter him. In all this, Savarkar presents a contrast in disgrace. He would cringe and prostrate at the first opportunity when forced with imprisonment. He was a merchant of hate. He was heavily subsidized by well-known financiers, as the archives reveal. Savarkar did not misinterpret Hinduism. He ignored it. He did not pervert the message of religion to serve the ends of his politics. He perverted history for use in the service of his politics, a politics based on manufactured ancient wrongs for the spread of hatred and the spirit of revenge.”

This pretty much sums up, Savarkar stood for little more than hate & wished to build a nation that took pride in violence against those who didn’t fit into his idea of what constitutes Indian. His India was to be an emphatically militarized Hindu society where Muslims & Christians were to be second rung citizens.

The present ruling disposition sees him as a source of inspiration. He is to them what Marx is to the Communists. Many among the ruling party wish for the day when they’d finally replace Gandhi with Savarkar. The “image makeover” of Savarkar as a pro-independence revolutionary is a step in this direction but, do remember that someone who in his entire life never stood up for what he believed & goaded young men to commit heinous crimes in name of the nation is no ideal.

One thought on “The Epitome Of Cowardice: Understanding “Veer” Savarkar”